Most folks that I’ve run into of late are simply standing there, slowly shaking their heads in stunned disbelief. What happened? Can this really be true? Bernie was offering avenues that led to our Aquarian future, but his time was not yet. The two party system each yielded their candidate.As the hen in Chicken Run says,

“Are those the only choices?”

Shortly after the inauguration there’s a hard aspect to Pluto. This could be a measure of the economic and political meltdown that many have been anticipating for so long. It already is a subterranean shift with regards to power, control and manipulation. The New Moon, falling at seven degrees of Sagittarius (7 degrees, 43 minutes), is smack dab on the US Ascendant (7 degrees, 42 minutes), pointing a great, celestial finger at the the nation. 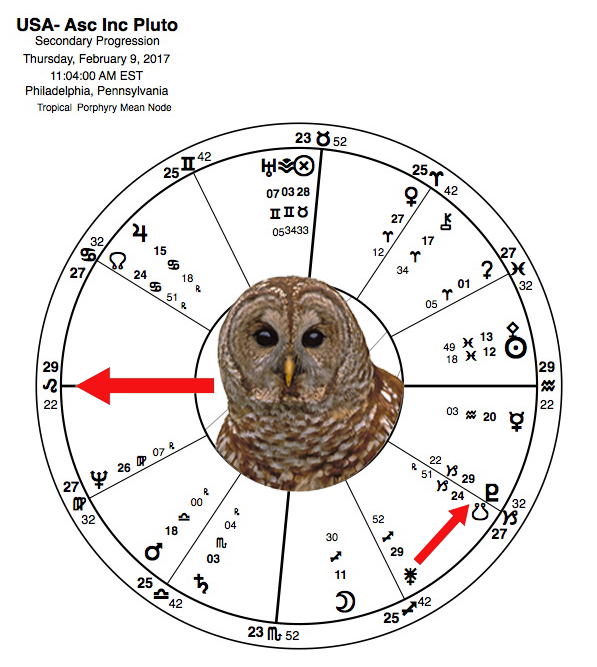 On February 9th, 2017 the secondary progressed US Ascendant will inconjunct (150 degree aspect) the US Progressed Pluto. The Progressed Ascendant is in the 29th degree (and 22 minutes) of Leo, while the Progressed Pluto is 29 degrees of Capricorn.We are getting ready to take a substantial hit.The twenty-ninth degree is the final degree of any sign of the Zodiac. It represents the end of a trend or era. It can also represent the termination of an individual who represents that era.

In 2014 the focus of power was shifting from liberal to conservative, from Democrat to Republican. The reports in the paper were right after the national elections. Here are a few of the headlines that month reflecting these themes in the New York Times:

Republicans First Had to Wrestle With Their Own Poor Discipline
By JEREMY W. PETERS and CARL HULSE
The Republican victory was the result of methodical plotting, careful candidate vetting and an abundance of preparation to ensure the party’s candidates would avoid repeating the same mistakes.

President Obama Left Fighting for His Own Relevance
By PETER BAKER
The midterm elections culminated a season of discontent for President Obama – and may yet open a period of even deeper frustration in his final two years in office.

After Election, Obama Vows to Work With, and Without, Congress
NOV 6, 2014
By JULIE HIRSCHFELD DAVIS and PETER BAKER
President Obama shook off an electoral drubbing and said he was eager to find common ground, but he also vowed to bypass Congress to change the immigration system.

Outside Groups With Deep Pockets Lift G.O.P.
By NICHOLAS CONFESSORE
The election was a pivotal moment for the “super PACs” and political nonprofit groups that helped the party defeat Democrats across the country.

In States Seen to Be Tilting Left, Voters Defy Democrats’ Forecast
By JONATHAN MARTIN
A powerful lesson for both parties emerged Tuesday: Demographic shifts that are gradually reshaping the American electorate cannot overcome a difficult political environment and a weak message.

With Fear of Being Sidelined, Tea Party Sees the Republican Rise as New Threat
NOV 9, 2014
By JEREMY W. PETERS
As Republicans on Capitol Hill move from being the opposition party to being one that has to show it can govern, a powerful tension is emerging between its establishment and its activist wing.

G.O.P. Is Making Progress Toward Presidency but Is Still Playing Catch-Up
NOV 10, 2014
By NATE COHN
Republicans still need to solve their long-term demographic problems, but their success in the midterms was not simply because of low turnout among Democrats.

We are seeing the same shift with this alignment between our political polarities, except that this time the Republicans will control two of the three branches of government, as well as being in a position to pick new members of the Supreme Court for the next few years. Money talks, and its ability to buy elections was witnessed here.

Misreading of the national demographics has been hounding the Republican party for years, but this year it took off in a direction unanticipated by either party. We stand at the end of an Age, and this is what happens as the pillars of society begin to crumble.

The old ways are deteriorating.

But Pluto is not only political power; he is also Lord of the Underworld. It is issues that involve death and passage between the veils. Here are some other stories from 2012 related to this alignment coming to a peak.

Obama to Send 1,500 More Troops to Assist Iraq
NOV 8, 2014
By HELENE COOPER and MICHAEL D. SHEAR
The deployment will double the number of Americans meant to train and advise Iraqi and Kurdish forces as they plan a major offensive against Islamic State fighters who have poured into Iraq from Syria.

Obstacles Limit Targets and Pace of Strikes on ISIS
NOV 10, 2014
By ERIC SCHMITT
Commanders of the American-led air campaign in Iraq and Syria are challenged by spotty intelligence, poor weather and an Iraqi Army that has only begun an offensive against the Islamic State.

Hard aspects mean just that. Whether a political minefield or military maneuvers, we are caught by circumstances that make it difficult to traverse.

Let’s see what happens during the first week of February, shall we?