HORSE WHISPERER
(WEBSite was down May 4th. This is copy from March 6th for Moon Mail fans.)
One of the themes that most WEBHeads will have heard quite often in these columns is that the tighter alignments are to each other, the more powerful they are. The above chart is particularly packed in Pisces. Four planets (if we can call Vesta a planet) are within two-thirds of a degree of each other. 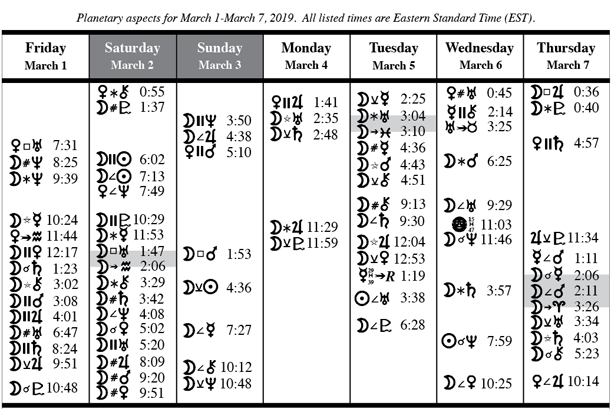 The upper half of these columns are AM times, the lower half PM.      Dat’s what I’m talkin’ ’bout.

The New Moon is in Pisces. Neptune rules Pisces. Vesta is the asteroid that deals with concentration and focus. The Sun lends a conscious awareness to whatever it touches. The tightness of the conjunction alignment (the strongest of all the zodiacal aspects) within 39 minutes of arc (not degrees) lends power to this configuration.

Some of our most deeply held beliefs are coming to the surface and we feel very strongly about whatever we’re chewing on. This is a contrast between the ethereal (Neptune and Pisces, our imaginations for instance) and the mundane (the Sun and Vesta). On the positive side, we can take what we envision for ourselves and put the effort into it to bring it to fruition.

By itself, Pisces is an archetype of escape. There are choices about how we choose to manifest this energy. It can be a binge, whether in intoxication or TV watching, or it can be a dream come true. (Cue: Everly Brothers, All I have to do is Dream) It’s issues we deeply believe in, building to a spiritual zeal, whether that manifests in the political arena with a particular candidate, or in life with a particular partner. There is so much noise and light (Sun) in our subliminal basements (Pisces) that during the day we can’t seem to wake up.

We can’t seem to go to sleep at night, either.

Mercury will have just turned direct, where else? in Pisces as this lunation occurs. It is entirely possible that a situation from out of our past returns to be revisited. It is pivoting in the final degree of the Zodiac, and conjuncting Chiron in the first degree (zero degrees) of Aries. The path forward is being prepared, and it may not be an easy one, but it is what is being called for. There is a bridge being built between the present and the future.

We currently have the concentration and focus to bring our imagination into reality, applying the time and effort to see it through. The conjunction is generally thrown into the positive camp of alignments but is so translucent as to be easily nudged in any direction, so I wondered if there was a fixed star in this position that might influence it in a more pro or con manner, pushing it one way or the other.

Indeed there is.
“Zeta (ζ) Pegasus, Homam, is a light yellow star on the neck of the Winged Horse.

Homam seems to have been first given to this in the Palermo Catalogue, from Sa’d1 al Humam, the Lucky Star of the Hero **, in which the 15th century Tartar astronomer Ulug Beg included zeta (ζ Homam); other lists have Homan. But the 17th century English orientalist Thomas Hyde said that the original was Al Hammam, the Whisperer. Al Tizini (Arabian astronomer, first half of 16th century) mentioned it as Sa’d al Naamah, {p.328} the Lucky Star of the Ostriches; and Al Achsasi, as Na’ir Sad al Bahaim, the Bright Fortunate One of the Two Beasts, which the 10th century Persian astronomical writer Al Sufi had said were theta (θ) and nu. Thus xi (ξ) was one of the general group Al Su’ud al Nujum, the Fortunate Stars.

**[Allen notes: This Arabic Sa’d is our “Good Luck” and a component word of many titles in the Desert sky, all of which seem to have been applied to stars rising in the morning twilight at the commencement of the pleasant season of spring. Al Sa’dain, the dual form, was the title for Jupiter and Venus, the Two Fortunate Planets; Al Nahsan, the Unlucky, referring to Mars and Saturn]

[Star Names, Their Lore and Meaning, Richard Hinckley Allen, 1889].”
That’s what I would call a good vibe. 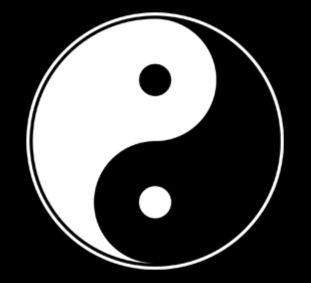 Putting all the Pisces pieces together, my intuitive judgment is that we are coming back to a place to say hello, and goodbye, to a way we have been. The choice is still ours, but this is the crossroads. Pisces is the final chapter, a time to wrap things up and move them along. But there are no hard aspects specifically hammering this alignment, merely (merely, he says) the sheer power of it’s focus. This one runs deep. We can conjure ghosts from out of our past and talk to them, perform six miracles before breakfast, see what is invisible, do what cannot be done. All we have to do is have faith in ourselves and those around us. Bringing these forces into balance is our job.