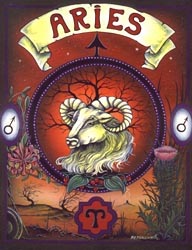 In the annual seasonal cycle we have once again come to the time of the start of another year. Creation is made new as time throws off its wintery coat and puts on a lighter, more colorful flowery dress. The Sun, having crossed the Vernal Equinox, is quickly rising in the sky, bringing additional light and warmth to the land. With the assertive power of Aries and the wooly fleece of the lamb, there will still be some raw weather and chilly conditions, but the tide is turning with the birth of the promise of things to come.

Aries is a cardinal fire sign ruled by Mars. It is the genesis and origin of all things. As the first sign of the zodiac, it deals with primacy and the blue ribbon. Like their celestial order they exclaim, “I’m number one!” which can have various implications. As a cardinal sign, they are self-powered initiators, who are not afraid to leap into new situations, excited by the challenge of the moment. One of the problems is that the challenge of the moment quickly gives way to the challenge of the next moment, and this sign is notorious for not finishing many of the endeavors they undertake. As a fire sign, these people generate heat and power. They are self-assured and daring, willing to take on either the forces of nature or the fire of battle, pitting their personal prowess as pioneers, soldiers, firefighters (literally as well as figuratively), and sports enthusiasts. They like the energy to be up.

The April Fool can be typical of this sign, of those who rush too quickly into situations where they don’t belong. “Look before you leap” is sage advice for Aries, but they would counter, “He who hesitates is lost,” and indeed, their initiative and readiness to act at a moment’s notice can often tip the balance in situations requiring action. These folks are totally immersed in the moment. Sometimes that’s a good thing, while sometimes it isn’t.

Mars is the God of War. On the high side, it’s energy exhibits daring and courage, strength and bravery in the face of danger. In the Daily Planets, when Mars is well aspected, these are times to take the lead, assert yourself, be strong and do what needs to be done. Under hard aspects, we suggest caution as too much speed may get you a ticket, or you might purchase an item before you realized you could have gotten it elsewhere cheaper, or even that you really didn’t need it at all. Under hard aspects the danger of getting burned (too much fire) is increased, on the stove, by the campfire, or through setting off someone’s anger.

Aries rules the head, and these individuals can often be quite beautiful or handsome, their rugged individualism inflamed by an abundant set of hormones. They are sensual, but are more prone to over heat at the drop of a hat. The good news is that they ‘vent’ and move on, quickly forgetting about what everyone else is still so upset about. 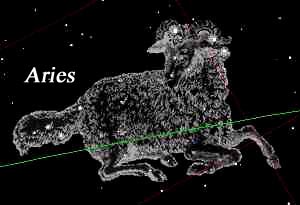 As with any cardinal signs, this association indicates a willingness to try out new paths, to start new directions, to be willing to be the first in line or to try a prototype. They can also be the first to get burned, or the first to succeed. They can become the heroes, like a Charles Lindbergh or an astronaut on the Moon, going where no man has gone before. This can also be scary, and you may just find out why no one has tried it before!