The following are the aspects the US will be dealing with through August this year. They are not all the aspects that are happening, but, in this astrologer’s humble opinion, they are the more powerful alignments, the ones that will impact us the most. We have already reviewed in the WEB the most critical of these alignments earlier in the year, but May is now behind us. June won’t be far behind. Before we know it, August will be upon us. 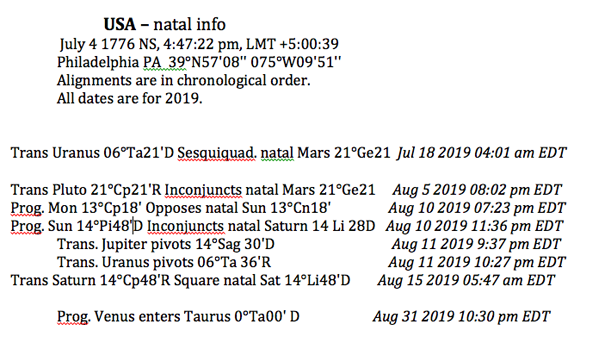 The first aspect we have listed is July 18th as Uranus triggers Mars. The reason we’ve included it is because this is a hard aspect to our natal Mars. On August 5th Mars will be hit again as Pluto inconjuncts it. Both Uranus and Pluto are outer planets which move very slowly. Uranus will stir things up, Pluto will finish the job. The first alignment should give us a clue as to how it is manifesting by observing what is happening in the media. Here is what Solar Fire (my astrology software) had to say about this combination; transiting Pluto inconjuncting the US natal Mars.

“You are about to make changes in an area of your life that has recently demanded great motivation and energy. Perhaps a project which has been a major force in your life is ending, or it could be your role which is changing. Either way you are letting go of a sense of power and need to make adjustments accordingly.”

And that is just the opening salvo for the month. These are hard aspects. Pluto is the contemporary ruler of Scorpio. Mars is the ancient ruler of Scorpio. Force is being applied, Martial Law is coming to the fore. Anger is the guiding star. Some very costly mistakes, both in lives and dollars, are being made now.

Since Congress is recessed through the month of August, we can anticipate that what happens is being generated by either the executive or the judicial branches, or possibly by a foreign encounter. As we stated before in previous editions the financial world may take a hit as well.

The Supreme Court calendar runs this year from Monday, January 7th to Friday November 29th with a month long break through June (3rd through the 28th). It is equally possible that a conservative Supreme Court decision is coming down (prog. Capricorn Moon) that is hard to swallow.

But it is the 48 hour period on the 10th and 11th of August that really stands out. Two powerful alignment take place on the 10th, and two outer planet pivots occur on the 11th. The progressed Sun is inconjuncting the US natal Saturn, and the progressed Moon is opposing the natal US Sun, otherwise known as the Full Moon. Now, this is not a transiting aspect that you can watch in the sky, it is something that is happening in the soul of this country, helping to define who we are as a people and a nation.

Personally, I agree with Speaker Nancy Pilosi. This is not the time to try and push impeachment as it will not pass the Senate. Wait until the financial statements come out about his taxes and bank loans, of how he has committed fraud (a language, in dollars and cents, Republicans understand), and of how he’s cheated the people in dollars and sense. It may be that this is how the alignment will manifest, but it would take a special session of Congress to stay and attend to this singular (singular?) issue. If we attempt to impeach him now and fail, it will strengthen his hand for the next election. During the presidential debates, Trump was able to stave off a unified Republican effort to not have him as a presidential candidate, but obviously he was able to overcome the opposition each time.

It’s something he’s good at.

Those Gemini’s can be tricky.