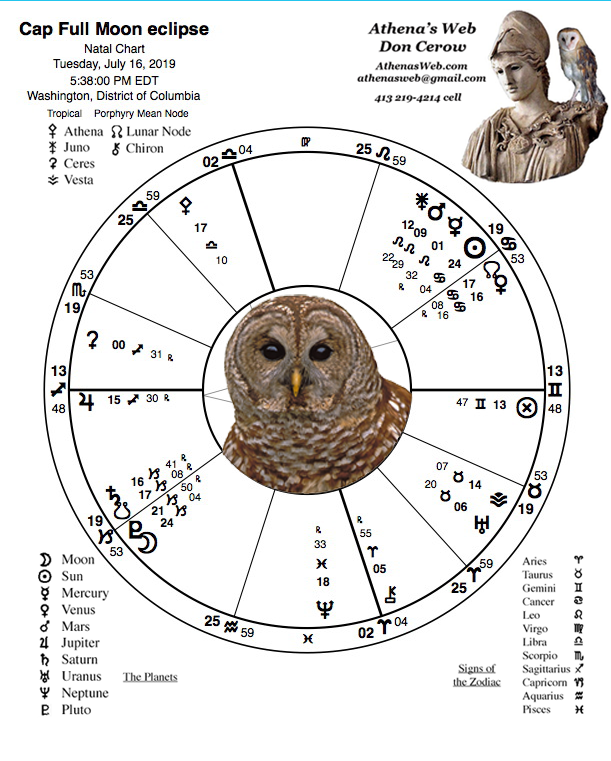 CHART OF THE FULL MOON
This is a powerhouse of a Full Moon, and it initiates a chain of events that will run through the end of August. It starts now, builds into the 10th and 11th of August, and completes running its course by the end of that month. The Full Moon is an eclipse, one which is conjuncting Pluto. A way of being is coming to a conclusion. 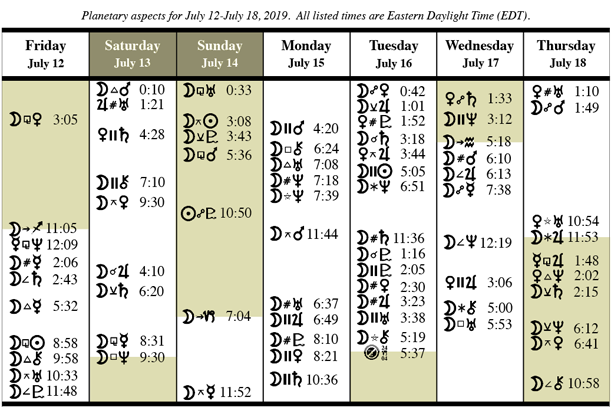 The top half of these columns represent AM times, the lower half PM.

We have looked at these combinations before. We get an early signal that will give us a clue as to where this turbulence is originating from as Uranus first sesquiquadrates the US natal Mars on July 18th (that’s like, now). With the US natal Mars in the 7th house, this could be our two party system not only squabbling  over Republican vs. Democrat with the recent racial comments, but also the in-fighting within each of parties.

Next we have Pluto inconjuncting Mars which represents a more forceful, aggressive and deeply emotional action or reaction. This is the same Mars that Uranus is currently triggering. Pluto is the contemporary ruler of Scorpio, Mars the ancient ruler of Scorpio. Making a hard aspect to each other will produce raw and impulsive behaviors. Ultimately this alignment can be very self-destructive. Individuals are angry with each other and are acting impulsively. It’s knee-jerk material. Again, this is Mars in Gemini and therefore could be dangerous words or ultimatums, challenges or threats. Mars is the God of War so there could be some serious saber rattlings going on now as a smokescreen for anything from sexual misconduct (Pluto and Mars), financial misdeeds (Pluto) to legal confrontations (the 7th house). It could even be all of the above. The power of this alignment will build to August 5th. 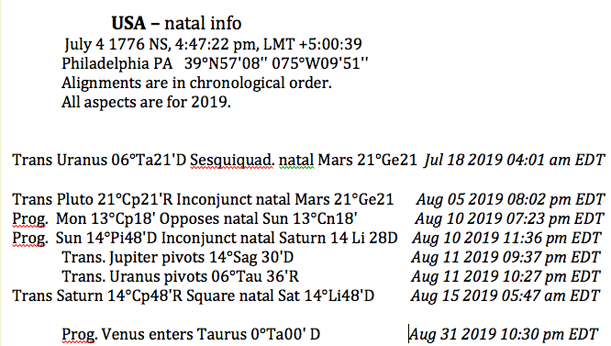 Then we will build to the anvil of this series where things are really being hammered out on the 10th and 11th of August as the progressed Sun inconjuncts Saturn under the rays of the progressed Full Moon. People are reacting from their gut. Tensions arise, particularly through women.

The planetary pivots of Jupiter and Uranus add seasoning to the sauce, throwing more than a pinch of change into the mix, while the progressed Venus leaves Aries and enters Taurus at the end of the month, indicating an old way of doing things is coming to a close with this series of events. These are not the only aspects that are are occurring through this period, but in this experienced astrologer’s eye, they are the most dynamic alignments when things will really be coming to a head.

The curtain is about to go up. Stay tuned.