This Full Moon is a good example of a principle we have long espoused here on the Web, that planets at specific angles are impacted by their positions, triggered by their influence. The Full Moon is at twenty degrees and fourteen minutes of Aries. Right across the chart is the Sun at twenty degrees and fourteen minutes of Libra. This ‘opposition’ is what occurs once every month, when our two luminaries are 180 degrees apart, one half of a circle (360 degrees) from each other.

At the time of this opposition, Pluto is at twenty degrees and forty minutes of Capricorn, (basically) ninety degrees from either the Sun or the Moon. 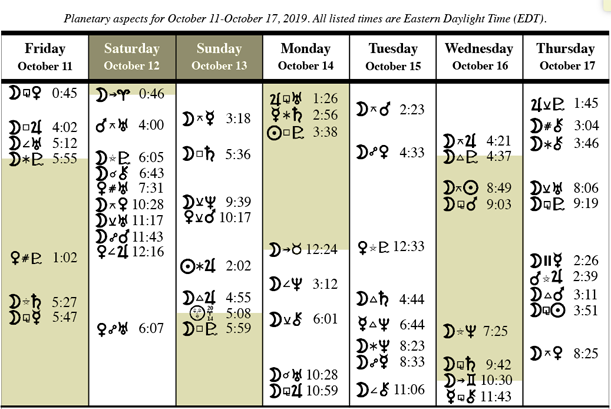 The upper half of these columns are AM times, the lower half PM.

There are two main interpretations involving this alignment. One is that our government (Capricorn), indeed, anybody’s government (the US, Britain, Turkey, the EU, Syria, the Kurds, Hong Kong, and mainland China), is being chewed apart under the celestial grinding of these alignments. Tensions are coming to a peak. This is a generic aspect, impacting the world and anyone who may have planets in their natal chart at 20 degrees of any of the cardinal signs. The other signs are feeling it too, but these cardinal alignments (Aries, Cancer, Libra and Capricorn) are the most heated positions. Check your chart. Anyone who has studied astrology for any length of time knows the caustic power of Pluto.

More specifically, the US natal map has Chiron at twenty degrees of Aries, right under this Full Moon, suggesting that many people are not feeling comfortable about the machinations of inflamed ethnic differences of slavery, white supremacy (the wounds of this nation’s youth), political infighting, opioid crisis and future of our constitution under this democratic experiment. 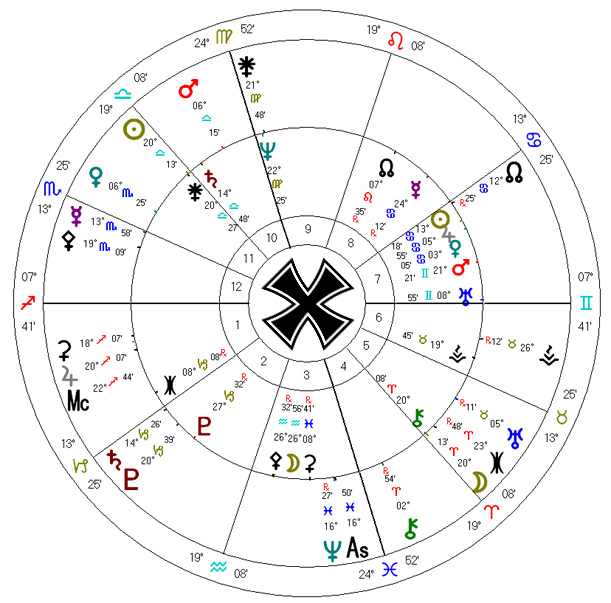 The Sun, Moon and Pluto are in the outer wheel (the transits), while Chiron (the key-shaped figure) is in the inner wheel (the US natal map), right under the Full Moon. The cross ‘points the way’ to the alignments.

We should see these themes becoming impassioned under this configuration. Capricorn is our government and president, Libra is the legal system, and Aries is how these configurations take it personally. Juno is part of the mix as well, at twenty degrees and twenty-seven minutes of Libra and our chief partners (Trump/Giuliani) are being brought into the mix.

An additional alignment that we have commented on before and will again is that transiting Pluto is moving back into its final alignment in an inconjunct to Mars on November 27, 2019, a combination suggesting that our government is being torn to shreds; people are fearful. As with most outer planet (Uranus, Neptune and Pluto) alignments this combination will have occurred three times before it is finished. The first two are already behind us.

On the first alignment on January 23 of this year Trump shut down the government in an effort to get funding for his southwestern border wall. While it drained 800,000 governmental workers of much of their savings after being furloughed or forced to work without pay for 35 days, the political ploy did not work. The president did not get money for his wall and on January 25th the wheels of government began to slowly turn once again.

The second alignment was exact on August 5th. From our August 16th Moon Mail we learned “there was the sexual trafficking by Jeffrey Epstein, (not to mention his murder/suicide). There are hundreds of lawsuits which can now be filed for old alleged child sexual abuse cases in New York after the passage of the Child Victims Act.”

Need we mention that mythologically Pluto was the one who raped his Queen?

Since that time we have learned that in early August of this year Rudy Giuliani, the president’s personal lawyer, met with a top aid of Mr. Zelensky (the Ukrainian president) in Madrid to encourage the Ukrainian government to investigate Mr. Trump’s political opponents. Pluto prefers to do things under the table, in secret. There is more we have yet to learn.

Under this combination the fundamentals of government are being rewritten. Either the executive or the legislative branches are being brought to their knees (Capricorn) in a struggle for power. This is an ongoing confrontation and is not over yet. The caustic elements of Pluto are burning away many elements of the way we do business in this country.

We are watching these themes unfold.