What is obvious this month is not so much what we see in the aspectarian as it is in the wheel. The congregation of planets gathering in Capricorn is the current news maker. While the Sun, Mercury and Pallas Athena still linger in Sagittarius, Jupiter, the lunar south node, Ceres, Saturn, Venus and Pluto are all securely snugged in Capricorn. The last three of those are at 19, 20 and 21 degrees respectively. They are tight, and even more potent. When planets gather like this, their efforts are more concentrated, more dynamic. Like a great tug of war, they all pull together, and more forcefully, on the material rope.

Our government, court system and its executive are what’s on the celestial, media and historical stage. 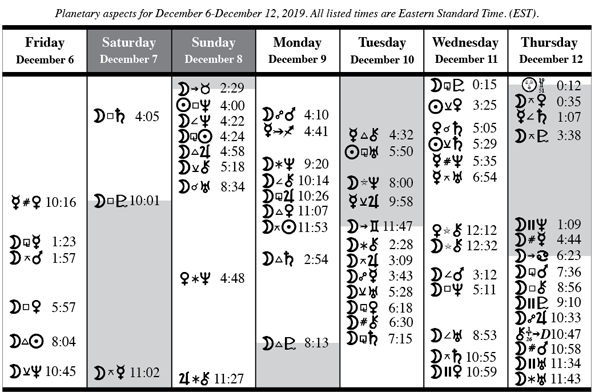 The upper half of these columns are AM times, the lower half PM.

Some additional issues are that Venus conjuncted Saturn (Baby it’s cold outside), and Mercury inconjuncted Uranus (electronic glitches) yesterday, while Chiron will go direct tomorrow (ouch, hey that hurt!). On top of that Jupiter is moving into a trine to Uranus, an outer body alignment and one that bodes well for some new governmental (among other things) beginnings.

But strong as this alignment is it’s not finished yet. 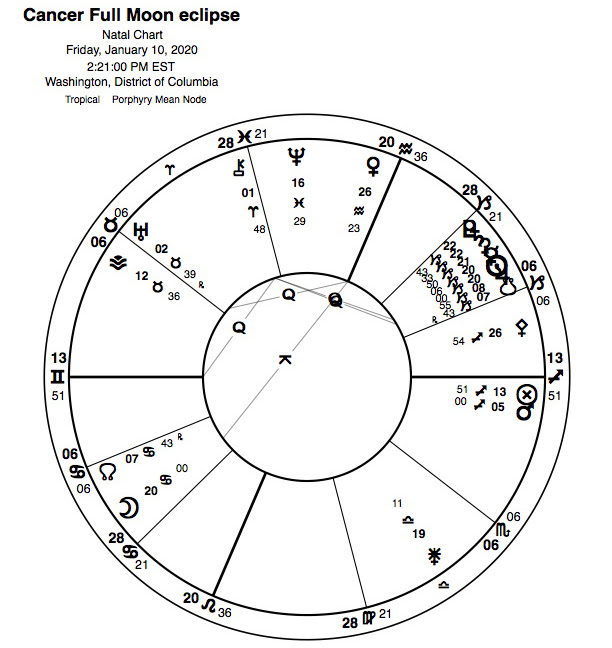 You might ask yourself, “What does all this mean, Dandy Don?”

Hold on, we’re not quite finished yet. How it plays into the presidents chart is quite interesting. He is our intermediary between Heaven and Earth, the celestial through the terrestrial. Let’s look at how this concentrated line up triggers the president’s natal map.

Let this be our central focus. We try to make it simple. How does 20 and 21 degrees of Capricorn align with the president’s chart? 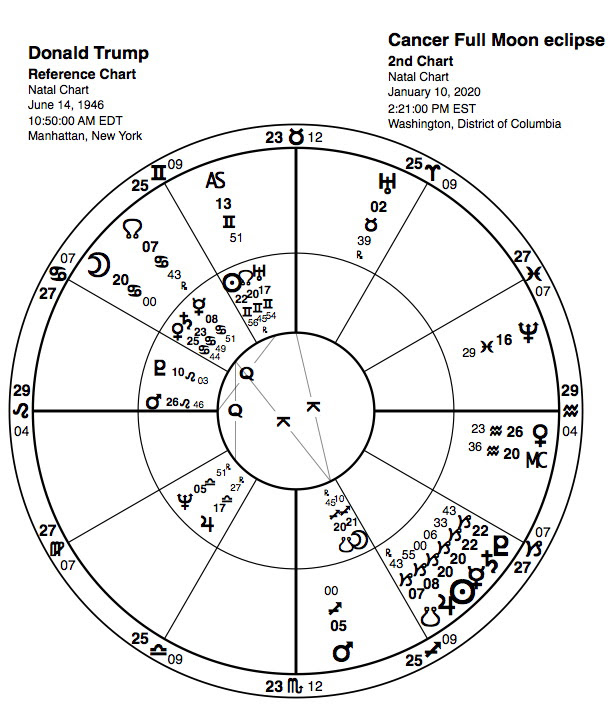 But then this stellium in Capricorn will trine his Midheaven at 23 degrees of Taurus. The Midheaven is the establishment, the traditional way of doing things, the power. The Senate and the Republican party will vote not to remove him and we will have a sitting, impeached, but still in power president.

President Trump was born during the eclipse of the Moon. The January Full Moon is an eclipse of the Moon. We are looking into the dark side. We are coming to the end of an Age. A way of doing things is coming to an end. We have front row seats to the transition. Looking to the government for help, for salvation is not where the path ahead lies, whether Republican or Democrat. If we want change, we need to do it ourselves. As we move into Aquarius and its new technologies, we strive for the opposite constellation, Leo. It is the children who will inherit a planet that is caught in the grips of Climate Change, it is the children who will bring war to an end by simply refusing to show up.

The ball of yarn is beginning to unravel. A way of being is coming to an end. Our experiment in democracy is getting ready to make a hard right turn.

They are setting the stage for the children getting ready to take over.

What if they gave a war and nobody came?