In addition to the generic combination that we’ve been examining, this Full Moon is also triggering the US natal map. On top of the Mars Neptune opposition ignited by the Full Moon, the US has a Mars Neptune square that is being triggered by this alignment. 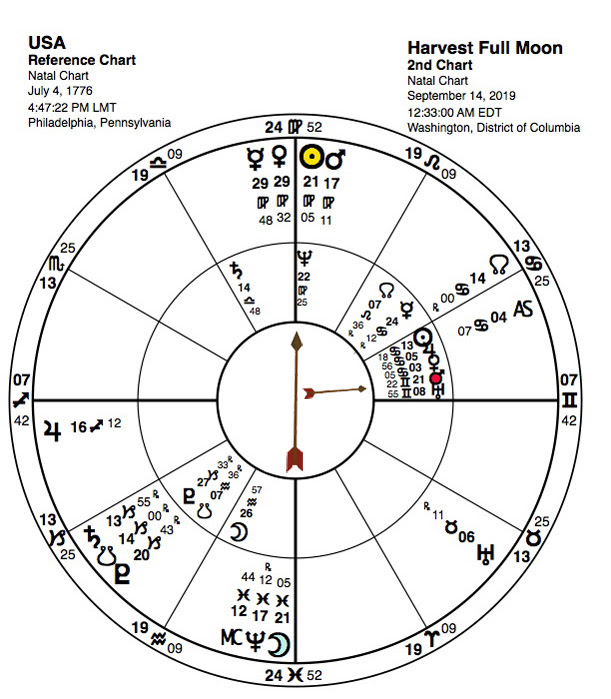 The inner wheel is the US natal map. The horizontal line which cuts both wheels in half is the framework for the US chart.

The outer wheel is for this month’s Full Moon and where it falls in the US chart.

On the inner wheel the US Mars is at 21 degrees of Gemini (small arrow, highlighted in red), squaring Neptune (the trident) at the top of the chart on the inner wheel. The Mars Neptune square is a US natal (at birth) aspect. Neptune stands at the peak of the US chart. The themes emerging here are what the country is known for; a country of dreams being fulfilled, Hollywood, and immigrants. With Pisces on the 4th house cusp one of the main images is where do we put all the immigrants, where will be their homes? With Mars squaring Neptune from the 7th house we have all these legal battles going on in both the federal and state courts about the high crimes allegedly taking place.

With Congress returning from their August break things will now begin to accelerate on the political stage. The presidential democratic contenders met last Thursday night focused mainly on health care (the stellium in Virgo), getting the troops out of Afghanistan (the services, more Virgo) and the legal status of guns (Mars) in this country as championed by Senator Betu O’Rourke. Another manifestation of the Mars Neptune alignments is that of a spiritual (Neptune) warrior (Mars). Clocking in at 2% (or was it 3%?), this is our David and Goliath match up, but we’ll have to see how it plays out. This boy’s fire has been lit.

In addition, there is another tropical depression headed for the Bahamas over the weekend.