We’re up to the twenty-first out of twenty-fourth chapter of Homer’s Odyssey, and we’re pretty darn pleased with the results. What is becoming evident is that both the Iliad and the Odyssey are celestial choreographies, using various stellar landmarks as benchmarks to weave their way through their plot line.

This week we’re looking at Sagittarius, a centaur labeled as a mutable FIRE sign ruled be the planet Jupiter. Its symbol is either a centaur shooting an arrow from his bow, or in script as simply an arrow with a cross on the shaft representing the bow. As an image this motif goes back a long, long way into the archaeological record, even earlier than Homer. There are various themes which are depicted in this chapter that represent Sagittarius, such as horses, donkeys and centaurs for instance. Sagittarius is the equestrian sign. With the suitors there are plenty of ‘shoot-from-the-hip’ criticisms, insinuations, jeering, taunting and various other connections, but we’re going to focus simply on the symbolism of the bow, arrow and quiver and offer the preponderance of repetition of this theme throughout the chapter. 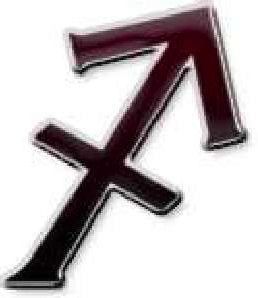 The bow and arrow are the stars of this show.

The time had come. The goddess Athena with her blazing eyes  (line 1)
inspired  Penelope, Icarius’ daughter, wary, poised,
to set the bow and the gleaming iron axes out
before her suitors waiting in Odysseus’ hall-

and there it lay as well . . . his backsprung bow
with its quiver bristling arrows, shafts of pain.

Reaching tiptoe, lifting the bow down off its peg,           (line 62)
still secure in the burnished case that held it,
down she sank, laying the case across her knees
and dissolved in tears with a high thin wail
as she drew her husband’s weapon from its sheath

cradling her husband’s backsprung bow in her arms   (line 69)
its quiver bristling arrows, shafts of pain

He stood at the threshold, poised to try the bow . . .      (line 142)
Three times he made it shudder, straining to bend it,
three times his power flagged- but his hopes ran high
he’d string his father’s bow and shoot through every iron
and now, struggling with all his might for the fourth time,
he would have strung the bow

He propped his father’s weapon on the ground,           (line 155)
tilting it up against the polished well-hung door
and resting a shaft aslant the bow’s fine horn
then back he went to the seat that he had left.

Picking up the weapon now and the swift arrow,          (line 168)
he stood at the threshold poised to try the bow
but failed to bend it. As soon as he tugged the string

Clearly your genteel mother never bred her boy            (line 195)
for the work of bending bows and shooting arrows.
We have champions in our ranks to string it quickly.

so with his virtuoso ease Odysseus strung his mighty bow.        (line 456)
and under his touch it sang out clear and sharp as a swallow’s cry.

He snatched a winged arrow lying bare on the board-                (line 463)
the rest still bristled deep inside the quiver,
soon to be tasted by all the feasters there.
Setting shaft on the handgrip, drawing the notch
and bowstring back, back . . . right from his stool,
just as he sat but aiming straight and true, he let fly-
and never missing an ax from the first ax-handle
clean on through to the last and out
the shaft with its weighted brazen head shot free!

A quick count yields 76 references to the bow, arrow, quiver or Archer God. That’s what we mean by repetition.

As we have seen in a number of chapters, it is not unusual for Homer to begin and end each with one of the representative themes being emphasized, and such is the case here. The image used here at the end of the chapter is a metaphor. We opened by stating that Sagittarius was a mutable FIRE sign, and here he closes with a FIRE image.

In fact, it’s the final word.