Here in the columns of the WEB over the decades we have continually come back to the theme of the Ages and their importance as molders of civilization. In general, we know more about that which is most recent. The further back into time one ventures, the less information there is to substantiate that period. We currently stand at the crossroads between two great signs, the ending of the Age of Pisces and the beginning of Aquarius. The last shift of the epochs occurred as the classical civilizations of Aries gave way to the hymns and chants of the Christian choirs of Pisces. 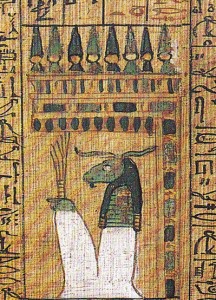 But if we take one more step back, when the Vernal Equinox was slipping out of the constellation Taurus into Aries, we witness yet another transition as the Bovine by-products gave way to Divine Ramifications. In Judaic theology, this was remembered as Abraham, following God’s wishes, attempted to sacrifice his son and substituted a Ram caught in the bushes (our cosmic dessert Tree of Life) in his place.

In Greek theology we find the myth of Phrixus and Helle, with the latter ‘slipping off the rear’ of the Golden-Fleeced Ram, the focus of the Vernal Equinox at that time, as it flew through the sky only to later also be hung from a Tree. But if we step into Egyptian culture, we find the manifestation of another Ovis aries-seasoned divinity in the form of Khnum, the Ram-headed god of Creation.

The old kingdom of Egypt was experienced as the Vernal Equinox moved through the constellation of the Bull, but the Middle and New Kingdoms were under the tutelage of the divine stars of the Ram, as the Vernal Equinox, our Spring time marker and season of nature’s Creation, marched over the back of the stellar Ram. 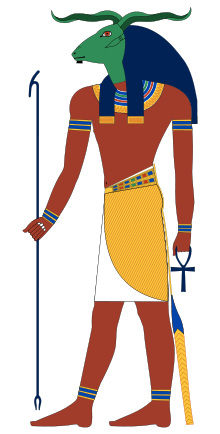 Indeed, it is as we move into the Middle and New Kingdoms that we find Khnum gaining in prominence and stature. Astrologically, the sign Aries is thought of being a great rush, powerful and fast. At Elephantine he was regarded as the source of the Nile, specifically as he brought forth the inundation. But more often he was thought of as the Creator of Life. During this epoch in Time, and led by the leader (Spring) of the zodiac, he was indeed the archetype that crafted Creation. Just as the world spins round and round, so Khnum fashioned children on the potter’s wheel from clay, the essence of the Earth and physical form, just as Genesis 2:7 states,

“Yahweh God fashioned man of dust from the soil.”

Being part of the sky and anything under the sky, he was the father of fathers and the mother of mothers. He was the Creator of anything born at that time, male or female. It was all crafted from what we would now think of as the stardust of Creation, the great body of God from which we come and to which we return. Together with Heket, the goddess of birth, he naturally assisted at birth. He was all that existed, but his time was marked by the meter of stellar motion. In him were the components of Re, the Sun; Geb, the EARTH; Shu, the AIR, and Osiris, the guardian of the Underworld and the waters that had to be crossed to get there. In short, contained in Khnum were FIRE, EARTH, AIR and WATER, the four elements of Creation.

While the cutlures and their heritage may have been different, they all shared connection and communication through the waters of the Mediterrean, the air that they breathed and the stars of their sky.