Excerpts are from Trump, the Art of the Deal.

Collusion- Law. Illegal cooperation or conspiracy, especially between ostensible opponents in a lawsuit.

At the beginning of Trump’s book, “The Art of the Deal,” he runs through what he calls “an average week,” and then goes on to describe all the phone calls he gets (there are many- typical Gemini), the projects he’s working on, and in general, how busy he is. Then in his final chapter he reviews the week of calls letting the reader know how each turned out.

“I think that it is in a way the most fundamental question that we don’t have the answer to. It is why is President Trump, from the time he was a candidate have such a friendly attitude toward Russia, unlike anything that we have ever seen in modern times? And I don’t think we know the answer to that.”

I know the answer.

It is, as they say, hidden in plain site. From the opening pages of the book:

2:30 P.M.         A prominent businessman who does a lot of business with the Soviet Union calls to keep me posted on a construction project I’m interested in undertaking in Moscow. The idea got off the ground after I sat next to the Soviet ambassador, Yuri Dubinin, at a luncheon held by Leonard Lauder, a great businessman who is the son of Estee Lauder. Dubinin’s daughter, it turned out, had read about Trump tower and knew all about it. One thing led to another, and now I’m talking about building a large luxury hotel, across the street from the Kremlin, in partnership with the Soviet government. They have asked me to go to Moscow in July.                                     p. 20

Am I the only one to have read this? From his conclusion at the end of the book he reflects on how each of these projects fared.

Moscow Hotel
In January 1987, I got a letter from Yuri Dubinin, the Soviet ambassador to the United States, that began: “It is a pleasure for me to relay some good news from Moscow.” It went on to say that the leading Soviet state agency for international tourism, Goscomintourist, had expressed interest in pursuing a joint venture to construct and manage a hotel in Moscow. On July 4, I flew with Ivana, her assistant Lisa Calandra, and Norma to Moscow. It was an extraordinary experience. We toured a half dozen potential sites for a hotel, including several near Red Square. We stayed in Lenin’s suite at the National Hotel, and I was impressed with the ambition of the Soviet officials to make a deal.                                                                        p. 241

While not yet a candidate, it is obvious that the seed of interest was being sown and grown here. The language they spoke Trump was fluent in.

For what it’s worth, he traveled under a very positive aspect; transiting Jupiter trined his natal Mars on July 7th, 1987. Here’s what Solar Fire had to say about this alignment:

“You are confident and optimistic and life seems to be more than meeting your expectations. You are enjoying working towards your goals and having some fun on the way, and you have plenty of energy to achieve your goals. Cooperation is also an easy task, and you find that others are pleased to help you achieve the success that you well deserve.”

Transiting Jupiter was in his 9th house, the house of overseas (foreign) connections at the time, exact about 72 hours after his wheels touched the airstrip.

The reason many are not shocked about this is that the president has dumbed down the idea of morality in his administration. He has hired and fired a number of people who are now convicted criminals. He himself has admitted to immoral actions in business and his relationship with women, about which he remains proud.

His Twitter feed alone- with it habitual string of mischaracterizations, lies, and slanders- is a near perfect example of a human being who is morally lost and confused. Trump’s evangelical supporters have pointed to his Supreme Court nominees, his defense of religious liberty, and his stewardship of the economy, among other things, as achievements that justify their support of the president . . .

The impeachment hearings have illuminated the president’s moral deficiencies for all to see . . .  None of the president’s positives can balance the moral and political danger we face under a leader of such grossly immoral character.

If we don’t reverse course now, will anyone take anything we say about justice and righteousness with any seriousness for decades to come? 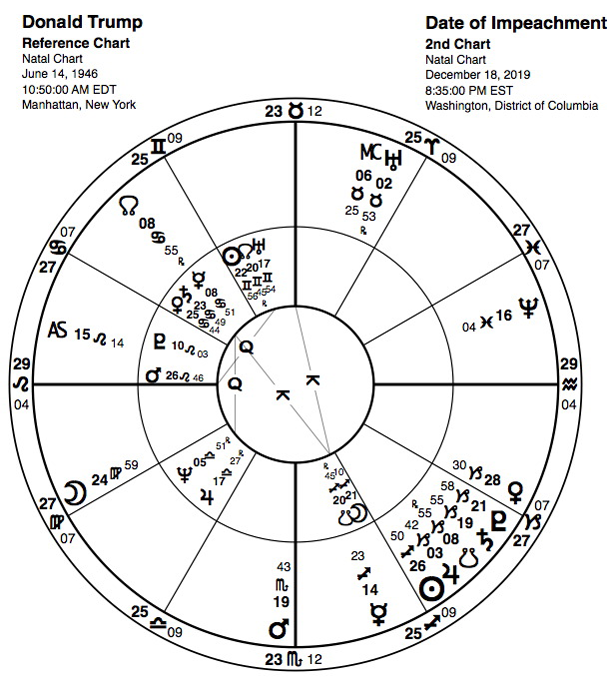 Capricorn is the structure, Aquarius is the structure breaker. It doesn’t do what you want or expect it to. That was the House, but the Senate is still going to protect him.