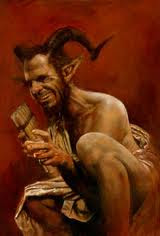 The full article by Brian Clark.

This article by Brian Clark is a gem. It is both well-researched and well-written. It generally illustrates that Pan is related to panic, panic is etymologically related to pandemonium, and that brings us to the pandemic. Turning around and running away very fast is what panic is all about.

In the old school Pan is thought to be a ruler of Capricorn. He was changed into a Goat-fish (not the sort of thing one tends to see these days) in an effort to escape after the great fight with Typhon. With a number of planets lined up in Capricorn since November, and with retrograde motion bringing this concentration back into Capricorn again over the next few months, it would make sense that Pan should come into focus at this time. Due to his mythological character Pan was associated with nature, fertility, the garden and spring. 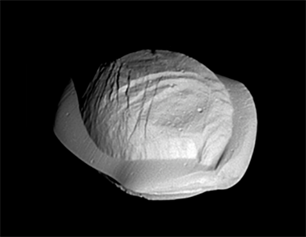 Astronomically speaking, Pan is the closest Moon to Saturn and is what is called a ‘ring-shepherd;’ responsible for keeping the Encke Gap, the innermost ring, free of any smaller ring particles. Pan is not oval but rather walnut shaped, presumably due to all the particles that attempt to enter the ‘gap’ and wind up bouncing off Pan’s surface, chipping away at it, pushing the smaller pieces back into their appropriate bands.Pan was discovered on 16 July 1990 and named on 16 September 1991.

If you’re into both mythology and astrology, Brian’s six page composition is a wonderful read.