This is the natal wheel of President Donald J. Trump. 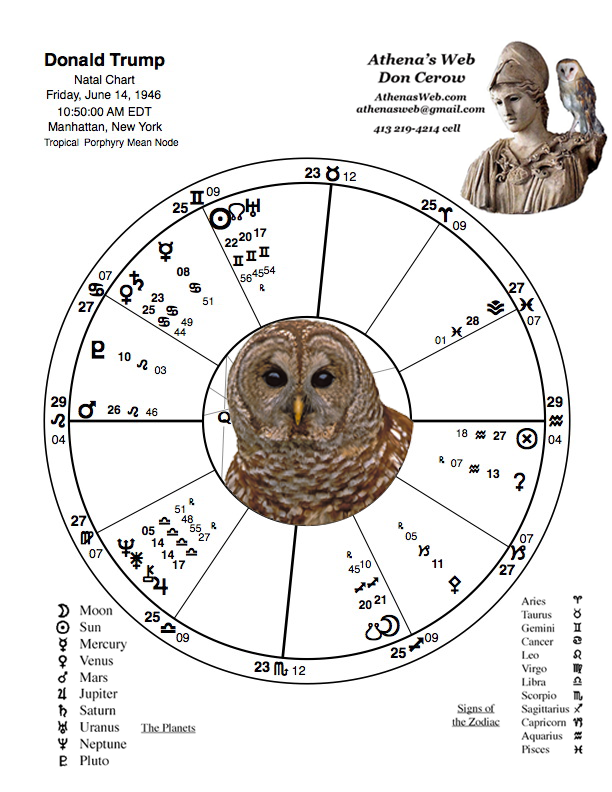 The way in which I generally begin to read a chart is by looking at it’s big three, the Sun, Moon and Ascendant. The interweaving of these three, as well as anything conjuncting any of them, are where the main influence of the chart, and the person’s life, rests. We will look at other alignments in his chart later, but we’ll begin with the basics.

Let’s start with the Sun.

Trump is a Gemini. Communication is his thing. He has single-handedly re-crafted domestic and international relations through his early morning tweets, much to the outrage of the traditionalists. Gemini is ruled by an AIR sign, and his opinions flip like a flag on a pole. ‘I said it, I didn’t say it, that’s not what I meant when I said it;’ they’re all variations on a theme. We’ve covered this component before in a previous column.

The Donald’s (I feel like we’re a a first named basis here) Sun in Gemini is conjuncted by Uranus, which makes him a truly unique individual, independent and free, doing things his own way, marching to the beat of a different drummer, especially with regard to Geminian themes (communicationally). He makes treaties with our enemies and breaks them with our friends (allies).

His Moon is in Sagittarius, which gives him an international presence. He has real estate all over the world, and is looking to develop more. He tends towards extremes, lacing his sentences with ‘the best you’ve ever seen,’ ‘the most you’ve ever known,’ ‘the worst possible,’ etc. Quoting from his book, “The Art of the Deal,” “I like thinking big. I always have. To me it is very simple; if you’re going to be thinking anyway, you might as well think big.”

That leaves the Ascendant, the sign and degree rising in the East at the time he was born, and that’s twenty-nine degrees of Leo.

He is the king. Underscoring this premise, his Mars conjuncts his Ascendant at 26 degrees and 46 minutes, almost 27 degrees, of Leo. His actions have a regal expectation to them. His lifestyle would be fine in a realm, no one would question them; but ours is a representative democracy, not a kingdom. And there is another alignment, not seen in the natal wheel, but obvious for those who have spent a little time studying the stars, and that is that his Ascendant is conjunct Regulus, the alpha star in the constellation Leo. Most WEB readers are aware of the emphasis I put on the tightness of orbs. Check this out:

Trump’s Ascendant is 29 degrees and 04 minutes of longitude.

Regulus’ position is 29 degrees and o3 minutes of longitude.

They are one minute, not one degree but one minute of arc distant from each other.

This guy really is the king. He just got dropped in the wrong interdimensional time zone.

But these three indicators, just looking at them superficially, do not explain his attitude toward women, indigenous families, separating children from their mothers, the Dreamers and his public lack of emotional warmth to our long-time allies against Isis, the Kurds. It’s as though he has a chip missing, some part of him that has no feeling for anyone who does not support him (even though the Kurds did support us, and therefore him).

Chip missing, indeed. Though not visible during Manhattan’s daylight hours he was born during an applying eclipse, exact some three hours and fifty one minutes after he was born. The preliminary phases would have started before that.

His lunar light was going out at birth.

His receptor is faulty.